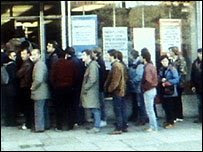 You don’t need me to tell you that fear and uncertainty stalk the land.

The recession is dealing a body blow to the labour force. Jobs are being lost at the rate of a thousand per day.

Community welfare officers struggle to cope with the needs of an ever expanding client base. A client base of people who studied hard, who trained hard, who worked hard. And who paid their taxes in a diligent and timely fashion. Yes, paid their taxes without resorting to scams or schemes like our home-grown “Masters of the Universe” whose venality, dodgy dealing, incompetence and ‘crony capitalism’ have brought us to where we are today.

And guess who has now come out against crony capitalism?

A certain “Brian Lenihan” was railing against crony capitalism in the Financial Times last week. Could this possibly be the same “Brian Lenihan” whose party has elevated cronyism to an art form? For God’s sake, Brian: Fianna Fail, invented cronyism. You know of no other way. It is your life-blood.

With Fianna Fail you are either in the tent or outside the tent. You can try and fool the FT but you can’t fool the people, Brian.

Just because the Galway tent has been given the Biffo Boot doesn’t mean you have changed your ways.

For as long as FF control the corridors of power, we can never put an end to crony capitalism.

But put an end to it we will! It is the Labour Party, and the Labour party alone that will defeat crony capitalism.

I was struck by the following curious point in regard to the reports today about the banks. A new group of investors have offered the Minister for Finance a solution to the problem. Last week, another group of opportunists, investors with international connections, offered a solution to the Minister for Finance. A picture comes to mind of the Minister for Finance sitting in his office, tapping his fingers on the desk almost waiting for people to come to him with suggestions. Surely, it should be the Minister who makes such bold moves. I do not agree that there is not a requirement for recapitalisation of the banks. Manifestly, there is such a requirement. There needs to be a debate on how it should be brought about and on the controls that should be put in place by Government in that regard.

I would like to hear from the Minister for Finance what he and the Government proposes to do other than waiting for others to come to them with suggestions. This seems to be the manner in which Government is being run in regard to these serious issues. The Taoiseach, when Minister for Finance, made a reasonably thoughtful speech a year ago at the Indecon conference.

I wonder if he would take out that speech, dust it down and read it again to see what it is he would propose by way of addressing the palpable sense of not alone uncertainty but real fear, which is increasing by the day and almost by the hour, across the community. Everybody is seeking a solution to the problem. We accept the Government cannot solve every problem. However, we are looking to it for some measure of inspiration and hope and for a plan, but we are not seeing anything of that nature. The budget was botched and there is a failure to face up to many of the problems that led us to where we are now. One cannot work out one’s future course until one is clear about how one arrived at where one is. We must face up to rather than dwell on the fundamental mistakes of recent years.

The extraordinary, treacherous and reckless priming of the property sector happened under the watch of this Government and this must be faced up to. Decentralisation – it appears it will be reversed in the public service reform document – was a serious mistake and a shocking proposal, one that ought never have been brought forward. We are now seeing it being at least partly reversed in the new proposals on efficiency in the public service.

The collapse in State revenue in this country was well underway before the international banking crisis emerged. That is a fact, not an opinion. We must face up to these facts and have a proper debate on them. I respectfully suggest that the Seanad is a good place to have that debate, a somewhat more relaxed and thoughtful debate than is possible in the other House.

More :: After the opposition’s repeated calls, it has just been announced that there will be an all-day debate in the Seanad on the state of the economy with the Minister for Finance present. It will take place on Friday 5 December.